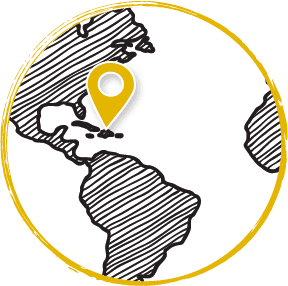 FECCANO (“La Fédération des coopératives cacaoyères du Nord”) is a federation composed of 8 member cooperatives, created in 2002 under the impetus of different initiatives and local NGOs. Since the beginning, FECCANO's ambition has been to ensure Haitian cocoa is valued at its fair worth. For decades, the area's (and country's) cocoa was not fermented and sold at low prices to a network of intermediaries, thus positioning producers as simply poorly paid suppliers of raw materials. In 2007, FECCANO teamed up with French NGO AVSF to start fermenting its beans in an effort to increase the value of its cocoa. In doing so, FECCANO became the pioneer of high quality in cocoa in Haiti. Propelled by this rich history, Valrhona and FECCANO met in 2011. Our exchanges led to the signature of a five-year partnership in 2015 which will enable us to support these pioneering producers and promote the sustainability and value of Haitian cocoa.

Our social and environmental actions together

Renegeration of over 50ha of “jardins créoles”, a local agroforestry system, in collaboration with AVSF (Agronomes et Vétérinaires Sans Frontières)

5 years after regeneration work was implemented, we see: • 2 x more revenues/ha (net added value) for regenerated plots vs control plots. • A transfers of skills among the Feccano teams

have been trained in good agricultural practices

including 127 who've renovated their plots (40% of whom are women)

Kilti Haïti 66% reveals a gentle tanginess set off by hints of fruit which are followed up by intense chocolatey notes, before a subtle bitterness completes the experience.

Discover our other partners